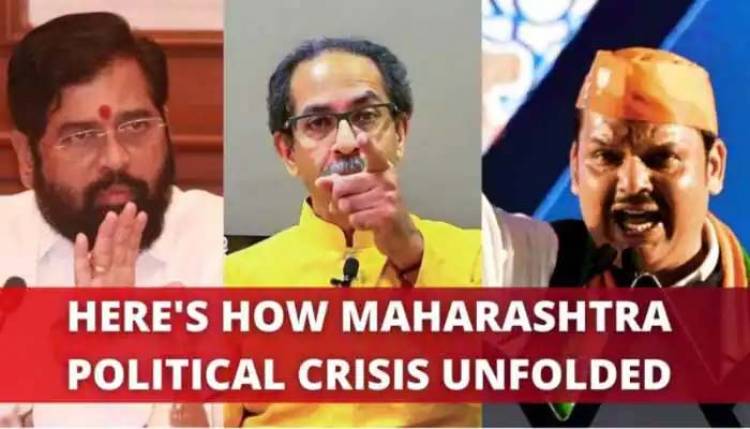 The process for the change of regime in the state started with the rebellion of around 40 of 55 Shiv Sena MLAs under Maharashtra cabinet minister Eknath Shinde's leadership.

Here's a look at how Maharashtra political crisis unfolded:

The process for the change of regime in Maharashtra started with the rebellion of around 40 of 55 Shiv Sena MLAs under Eknath Shinde's leadership last week. They camped in a posh hotel in Gujarat's Surat immediately after the Maharashtra MLC election results and then stayed in Assam's Guwahati for several days to decide their political strategy.

As the rebellion in the Shiv Sena by senior minister Eknath Shinde and other MLAs continued, Koshyari on Wednesday called for a special session of the Assembly on June 30 to hold a floor test of the Uddhav Thackeray government.

"A special session of the Maharashtra Vidhan Sabha (legislative Assembly) shall be summoned on June 30 (Thursday) at 11 am with the only agenda of a trust vote against the chief minister, and the proceedings shall be concluded in any case by 5 pm," Koshyari had written to Maharashtra Legislature's Principal Secretary in a letter dated June 28.

Maharashtra Governor Bhagat Singh Koshyari has written to state Assembly secretary to convene a special session of the State Assembly on June 30, with the only agenda of a trust vote against CM Uddhav Thackeray pic.twitter.com/9M5htIIE9R — ANI (@ANI) June 29, 2022

Subsequently, Shiv Sena leader Sanjay Raut termed the Maharashtra Governor's order for a floor test as "unlawful" and the Maha Vikas Aghadi, the coalition of Shiv Sena, NCP and Congress, approached the Supreme Court against the floor test.

Floor of house only way to settle these issues of democracy: SC

While hearing Shiv Sena chief whip Sunil Prabhu's plea against Maharashtra Governor's direction for a floor test, the Supreme Court observed that the floor of the House is the only way to settle these issues of democracy. A vacation bench of Justices Surya Kant and JB Pardiwala asked senior advocate Abhishek Manu Singhvi, appearing for Sunil Prabhu, how can the floor test impact the disqualification process or interfere with the powers of the speaker to conduct disqualification proceeding.

Minutes after the Supreme Court refused to stay Maharashtra Governor's direction to the MVA government to take a floor test in the Assembly, Chief Minister Uddhav Thackeray resigned from his post.

The Governor accepted the resignation and asked Shri Thackeray to officiate as Chief Minister until alternate arrangements are made. pic.twitter.com/lK1lgR5Jhg — Governor of Maharashtra (@maha_governor) June 29, 2022

During a webcast, the Shiv Sena chief said that he was "not interested" in playing the numbers' game and also informed that he is quitting as a member of the Legislative Council. Thackeray said he had no regret in leaving his post.

"Let the rebels who grew politically because of Shiv Sena and Balasaheb Thackeray get joy and satisfaction of pulling down his son from the post of chief minister," Uddhav Thackeray was quoted as saying by news agency PTI.

"I don't want to get into the numbers' game. It would be shameful for me to see if even one of my own party colleagues stands against me," he said.

"Congress leader Ashok Chavan told me that if the rebels want, Congress would get out of the government and extend outside support. Those who were expected to ditch me, stood by me while my own left me," he expressed.

All eyes are now on the return of a BJP-led government as it is the single-largest party in the 288-member Maharashtra Assembly with 106 MLAs. Leader of the Opposition, Devendra Fadnavis, who met BJP's top brass twice in a week in Delhi, is most likely to be sworn in as the Maharashtra Chief Minister for the third time.

Lord Buddha's teachings are inspiration for India to be self-reliant:...