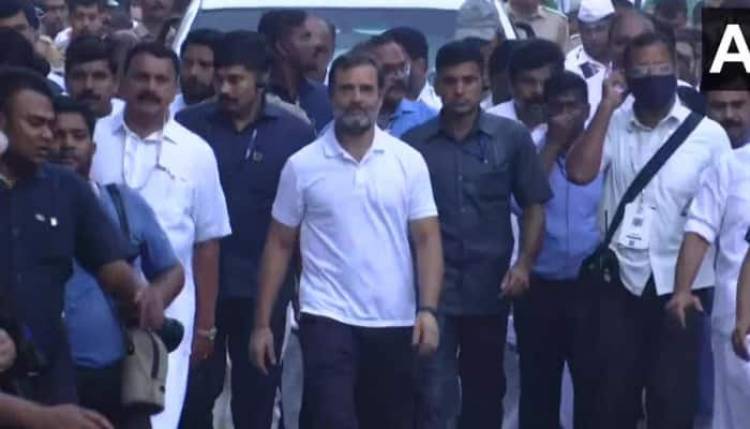 'Bharat Jodo Yatra':  The Yatra would resume from Government Arts and Science College at Gudalur around 5 pm and halt for the day at Gudalur Bus Stand after covering around 5.5 km.

Malappuram: Congress MP Rahul Gandhi along with party leaders and workers resume the 'Bharat Jodo Yatra' on Day 22 from Chungathara in Malappuram's Nilambur. The Yatra, which completes the Kerala leg today, would take a break at CKHS Manimooly at Vazhikadavu after covering around 8.6 km. Rahul Gandhi would travel to Government Arts and Science College at Gudalur in Tamil Nadu by car, according to the itinerary of the yatra. The march would resume from Government Arts and Science College at Gudalur around 5 pm and halt for the day at Gudalur Bus Stand after covering around 5.5 km.

The Congress' Bharat Jodo Yatra entered Kerala on September 10 evening and traversed the state for 18 days. The 3,570 km and 150-day-long foot march started from Kanyakumari in Tamil Nadu on September 7 and will conclude in Jammu and Kashmir.

On the penultimate day of the Kerala leg of the Congress party's 'Bharat Jodo Yatra' on Wednesday, Rahul Gandhi remembered late senior party leader Aryadan Mohammed, who died a few days ago. He said he was sad that the latter was not with them anymore. He said that he misses Aryadan Mohammed as he was a "secular and generous leader" who "worked tirelessly for his constituency and the state."

Addressing a large crowd in Wayanad, at the end of the day's yatra, Rahul Gandhi said he was "happy to end the Kerala leg of the yatra from my second home" -- his constituency. When he entered Wayanad during the day, he posted, "Thank you to the people of Wayanad for the heartwarming reception you have extended to the Bharat Jodo Yatra. Being with you all is like being home. #BharatJodoYatra."

"Tomorrow morning, the yatra will leave Kerala, entering Gudalur in Tamil Nadu and then onwards to Karnataka. In Kerala alone, the Yatra will have covered 440 km over 7 districts, with Yatris walking 20-25 kms every day - and most importantly - meeting, interacting, and conveying the message of Bharat Jodo to lakhs of people every single day," AICC general secretary in-charge communications Jairam Ramesh was quoted by PTI earlier in the day.

When the yatra entered Nilambur in Malappuram on Wednesday, Ramesh tweeted, "#BharatJodoYatra has entered Nilambur. A large number of migrants from UP/Bihar work here. International remittances bring in at least Rs.1 lakh cr a year into Kerala. Remittances from Kerala to other states are perhaps around Rs30,000 cr. Nilambur showcases the message of the yatra."

Jairam Ramesh also gave details of the journey to date, saying that the yatra on its 21st day has covered around 466 kilometres since it began from Kanyakumari in Tamil Nadu on September 7.

Pan-India NRC soon, do not link it with Citizenship Amendment Bill: Union...